Mitigating the effect of naturally
co-occurring mycotoxins in pigs

In experiment 1, 120 growing pigs (56 kg) were fed one of four diets for 35 days: without or with mycotoxins (180 µg/kg aflatoxin B1 and 14 mg/kg fumonisins) and without or with YCWE (0.2% inclusion). Pigs fed mycotoxins had reduced ADG and G:F only in the first week of the trial. Jejunal immunoglobulin G (IgG) was increased after 28 days, which tended to be reduced by the YCWE inclusion. Serum DNA damage was measured by 8-OHgG, which showed that mycotoxins numerically increased oxidative stress while the inclusion of YCWE reduced the levels of DNA damage.

In experiment 2, 48 nursery pigs (6 kg) were housed individually for 48 days. These pigs were fed one of four diets: without or with mycotoxins (180 µg/kg aflatoxin B1, 1 mg/kg deoxynivalenol and 9 mg/kg fumonisins) and without or with YCWE (0.2% inclusion). Pigs receiving mycotoxins had reduced body weight, ADG and ADFI. The reduction in ADG was recovered by the inclusion of YCWE. Mycotoxins reduced the apparent ileal digestibility (AID) of measured nutrients whereas the inclusion of YCWE increased the AID of the nutrients. Additionally, a measure of oxidative stress to proteins, protein carbonyl, was increased when pigs consumed mycotoxins but was reduced when YCWE was included during the challenge. Mycotoxins also altered intestinal villus structure, intestinal immunity and the proportion of bacteria with mycotoxin degrading ability. On the other hand, the inclusion of YCWE tended to improve intestinal structure and immunity while also reducing the proportion of pathogenic bacteria in the jejunum.

It was concluded by these researchers that the effects of mycotoxins on performance, gut health and immunity were greater in nursery pigs than grow finish pigs. However, it was also mentioned that these impacts of mycotoxin challenge may depend on the overall health status of pig. Additionally, it was observed that YCWE at 0.2% had a protective effect, improving pig health and growth.

To find out more, contact your Alltech mycotoxin representative.

If you’re experiencing issues with your livestock’s health or productivity and need advice from an Alltech support specialist like Nick, get in touch to book your Alltech 37+® consultation.

Mitigating the effect of naturally co-occurring mycotoxins in pigs 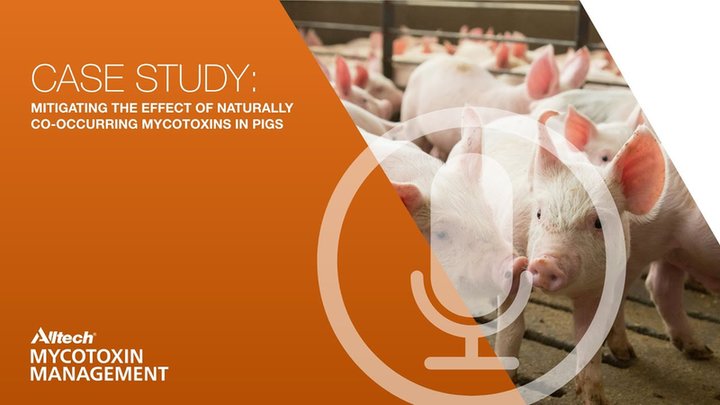